Teaching kids to code is a hot topic.

It’s now on the national curriculum for kids from aged four here in the UK.

And in the US, President Obama has added his penny’sworth claiming coding is the “new literacy” and all kids need to learn.

But how on earth are you as a mum meant to teach your kids to code if you’ve never coded before?

And you’re maybe not even sure what it is?

Well, having done it and actually taught my six year old coding, you know what?

And you know what else?

You already know to teach your kids to code!

You already know how to teach coding!

Because you see the thing is, code is just a language.

And you know how to teach your kids a language because you already helped them learn one.

There really are just a few simple things you need to remember.

So have a read through these and then head straight to the bottom of the post, and we’ll help you and your kids start coding for real …

How to teach your kids to code

1. Coding languages have sequences and patterns just like other languages.

2. Young children are hard wired to spot and absorb those patterns.

3. Songs and rhymes – and for older kids, jokes – are a great way to teach kids coding because they are full of sequences and patterns and routines just like code.

4. Children don’t need to be able to read to learn to code. Simple coding apps with drag and drop code blocks are available for kids. Don’t be fooled by the simplicity. Those blocks represent real, super powered coding concepts!

5. Get your kids making fun stuff quick. Let them feel the joy of creating.

6. But don’t just give them a blank screen and expect them to code … they’ll need examples to let them see what they could do and to help practice and absorb the patterns and rules.

7. We all know kids learn best through doing. They’re great at trying things out to see what happens and learning through what they see. This is the best way to let them learn to code.

8. Let their imagination run wild! Once they’ve learned some basic patterns and sequences, kids will be able to start coding their own stuff.

Then the world really is their oyster they can code whatever takes their fancy … stories, adventures, sport, science, fairy tales whatever they like …

And the more kids make and create stuff in code, the more fluent they’ll be, and coding really will be a new language … a new literacy … through which they can understand a changing world and express themselves within it.

It’s an introductory programming language that enables young children to create their own interactive stories and games.

ScratchJr was inspired by the popular Scratch programming language (scratch.mit.edu).

ScratchJr is available as a free app for both iPad and Android tablets. For more information about ScratchJr, see scratchjr.org. 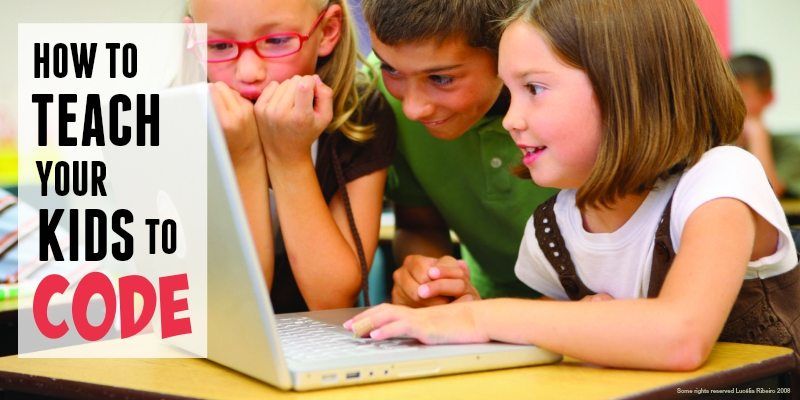 This is a great resource you are creating!

It's a bit of a labour of love at the moment Mary Anne, but so excited about launching the new site.

I have an 11 year old who is LOVING learning to code. Her teacher sparked the interest earlier in the year and she has worked her way through Scratch and a few other programs aimed at older kids, and now she wants to learn CSS and is amazed that I know what that is! LOL

Hope she's suitably impressed by your knowledge Kate :-) One of the things we're working on is ways to introduce even younger kids to html and css as it can be such a fun way to support writing and communication activities.

What a fabulous resource this post is! I love the idea of getting my hands on the Raspberry Pi!

Thanks for sharing these fab apps - will be checking them out. I agree that coding is so important to teach kids. My eye's usually glaze over the second I see a bit of code but maybe I too will learn something.

Hey! This is awesome! I'm always trying to get my little sister (now 13 to learn to code... and myself too!). Recently at work (CommuniGift.com) I was talking about a partnership with bitsbox.com, which is an awesome subscription-based kid's coding curriculum. I figured I share it here!

They have you designing apps, father's day cards, etc. and it ROCKS! I feel like people who enjoyed this post might love to check it out!!

Hi, I’m Luci. Let me show you how to simplify family life, so that you can create time and space to thrive rather than just survive.