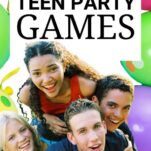 Teens can be a tough crowd to entertain. So here is a list of 28 of the most fun party games for teens that they will actually love playing at birthday and other parties and you won’t find them rolling their eyes at.

Let’s face it, the teen years can be as awkward for parents as they are for teens themselves. Not least when the time comes for you to try and provide them with entertainment at a party.

It’s especially tough when your lowly party games are up against the non-stop dopamine hits of TikTok and endlessly messaging with friends – even when surrounded by friends in the actual same room.

But if you want to give your teenager a really memorable party, one where they and all their friends got to really kick back and have some pure, unadulterated fun, a few well chosen party games can go a long way to getting the party started.

Clearly the teenage years span a good few years and a newly minted 13 year old is a very different creature to a 19 year old. So for the purposes of this post I am focusing on games for those most awkward of teen years – 13 to sweet 16.

Pick and choose from this list to make sure you have the best party games for Christmas, New Years Eve, birthday and sleepover parties for teens.

Wink murder is an absolute classic party game that never gets old. It is a game of stealth and cunning that teenages love playing.

2. JUNK IN THE TRUNK

Junk in the trunk is a game of movement and laughter that causes those who are really competitive to pull some serious moves! Perfect for flexible teens!!

Watch a game of Junk in the Trunk in action…

Who Am I? Is a bit of a classic party game. You can buy Who Am I? games, but I really like the version with a pack of sticky notes.

This game has become a modern classic guessing game that is an extension of the Who Am I game. There is even a Heads Up app (iOS/Android) you can download

Watch the cast of Cobra Kai playing Heads Up!

Fortune teller is a light-hearted look into the future for all the party guests.

This is a game to include if you really want to get the giggles going. The aim of the game is not to giggle – or show any signs of moving!

This is a hilarious party game for teens that works best with two teams. It’s a great antidote to the social media induced need to always look perfect.

This is a fun way to ask teenagers some interesting questions.

9. NEVER HAVE I EVER

This is a great game for a group of teens that know each other really well. The fun is in getting to shock everyone!

This is a brilliant game for teens to play. It is both revelatory and also hilarity inducing. The aim is for a player to get the other players to believe the lie.

Twister is such a classic party game and it is perfect for teen parties when all the teens know each other pretty well. This is a modern classic party game that works well for kids of all ages. It involves eating donuts without the use of hands.

This is a deliciously fun party game for teens with a sweet tooth!

This is where teens get messy in the name of sugar!

This game is another absolute classic that works really well for teen birthday parties that involves getting a cookie from the forehead to the mouth.

This is a variation on Cookie Face that involves even more skill.

This is another messy and really rather silly party game for teens that will have them causing mayhem.

The aim of the game is to see how many marshmallows the party guests can fit in their mouths while still being able to say the words ‘chubby bunny’.

This is a game of teamwork and skill that is a great ice-breaker for a teen party. You can play it in teams for bigger gatherings.

You don’t have to use peanuts. Have your gang stand or sit in a circle or in two lines. Each person should hold a plastic spoon in their mouths. The person at the start of the line should have a peanut, cotton ball, M&M, or something light on their spoons. Without using hands, have them pass the item around.

This game is a fusion between Spin the Bottle and Truth or Dare and is best for groups of teens who know each other pretty well. It can be pretty hilarious based on the dares and the willingness of the party guests to entertain each other.

Escape room games are huge at the moment and with good reason, they are really engaging and super fun, perfect for teens. What is particularly great about escape room games is that they can take up the duration of a party.

This is a great game for parties with lots of guests. It can get very hectic and competitive, but is also lots of fun.

This is a great game for teens with dreams of becoming popstars! This game can be as tame or as gross as you want to make it. Who dares wins!!

Why are TP games always so much fun? Is it toilet humour at work?! Whatever, TP Mummy is a super fun game for teens to play, clearly it’s a great game for teen Halloween parties!

This is a super simple yet super entertaining game for teens. It is best played with a gathering of at least ten.

This is like the classic game of telephone brought into the 21st century. You could play this game with WhatsApp or Snapchat but it’s best to use text if you want all teens to be able to join in.

Here’s a few tips to keep in mind when putting together a list of party games for teens.

I’m Luci. Let me show you how to simplify family life, so that you can create time and space to thrive rather than just survive.